How to Play Polocrosse

How to Play – the Novice, Newbie, Lay Version 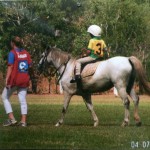 Riding ability… it will improve by default every minute you are on the field,

Anyone can play Polocrosse and have an absolute ball…

Nervous excitement is an absolute understatement of how I felt the day of my first game.  I gave myself plenty of time to get ready, needed to make sure everything was good to go.  Floundering trying to put the bandages on my horse (to ensure his legs are protected), a stranger from another Club comes over to help me, not only with the bandages but checks everything over for me- bell boots, saddle etc etc. He left with what was to become the slogan of the day  “Just go out and have some fun – that’s what it is all about”.

There is a sense of tradition as we walk as a team in line from our goals to the centre of the field, the art of holding my racket, reins and shaking hands with the opposition is not one I master the first time out but I feel excited and full of anticipation.  We peel around and come into to the centre line where the Umpires address us all – reminds us of some basic rules and safety concerns and check everyone is ready and it safe to play.

In this my first “chukka”, I am playing a #2 – I do not have the responsibility of either protecting our goals (this is the job for the  #3) or shooting for goals (this is the role of our #1).  My role is to simply help get the ball to our goal scoring third either by carrying it there myself (not likely today) or defending so that my more experienced team members would have a better chance of getting our points on the board.

My trusty steed is a 24yr chestnut gelding, whom in his prime played A Grade and by all accounts “had good game”.  His experience became blatantly obvious to me within the first 20sec of the match.

We were lined up at the centre line side by side our opposition #1’s in front attempting to be first to get the ball from the umpires throw-in and take it swiftly and cleanly straight down to their respective goals, us #2’s in the middle to grab the ball if missed by the #1’s and in the back the #3 not only there to pick up any crumbs but to be free to break away and chase the opposition #1 if they happened to snatch the ball at the throw in

Now to this day I am not really sure what happened next except the ole’ Packer knew exactly what was going on and turned out from the line up and took off down the field exactly as he was meant to and stopped short of crossing the line to the goal third – instinctively knowing he was not allowed in that area of the field…my feet came out of the stirrups, I bounced up and down in the saddle like an old sack of flour but I stayed on (just) and my mind caught up with my body and Packer just as the goal was scored and we went back to the centre line to start all over again…

WOW that was fast, that was awesome, feels like we have only been on the field for seconds and the bell rings and indicating the end to our first session of play and we leave the field as the 2nn Chukka come on to do their best for the next 6 minutes.

We watch the play and walk our horses, cheering our teammates on.  Their 6 minutes seems to go longer to me watching then ours did when I was playing and I couldn’t wait to go out there for the next 6mins…it still seems like that to me every game I play – it’s never long enough on the field!! 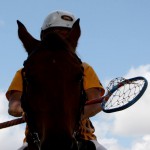 How to Play – the Technical Version 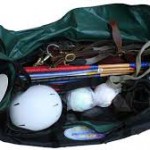 Each player is permitted only one horse in each match or tournament, except in the case of injury when a substitute horse can be played. Although there is no restriction on the height of horses used it is generally accepted that the ideal height should not exceed 15.2 hands.

A team consists of six players, divided into two sections of three who play alternate chukkas of a maximum of eight minutes each, either six or eight chukkas usually comprising a full match. The three players in each section consist of a No. I or “Attack”, a No. 2 or “Centre”, and No. 3 or “Defence”.

The total aggregate of goals scored by the two sections in each team constitutes the final score.

Infield, 27.5m from each end there is a line extending the width of the field which is called the “penalty line”.

The line encloses what is known as the “Goal-scoring area”, in which only the No. 1 of the attacking team and the No. 3 of the defending team are allowed to play.

Directly in front of each goal there is a semi-circle of 10m radius, and the ball must be thrown at goal from outside this semi-circle, and within the goal-scoring area.

The game is commenced in centre field, the players lining up side by side, one behind the other with the No. 1 or Attack in front, and the ball is thrown in by the umpire, over-arm, well above the players’ heads. The game recommences similarly after a goal has been scored. Whenever an attempt at goal fails, the No. 3 or Defence throws the ball back into play from just behind the penalty line, at a point directly in front of the spot where the ball crossed the back line. The umpire should indicate the spot from which the throw is to be taken.

Players pick up the ball from the ground, or catch it, in the net of the stick, and ride with it or throw it from player to player until the No. I or Attack is in possession of it in the goal scoring area so as to be able to throw a goal.

A player cannot carry the ball over the penalty line, but must bounce it on the ground, so that that player does not have possession of it while actually crossing the penalty line. However, a player may throw the ball to another player across the line on the full.

Hitting at an opponent’s stick, either to dislodge the ball or prevent the opponent gaining possession of it, is allowed in an upward direction only. Hitting down constitutes a foul.

“Riding-off’ is allowed, but crossing, stopping over the ball, or elbowing constitute fouls. The wedging or sandwiching of one player between two players “riding-off” simultaneously constitutes a foul and is dangerous play.

The penalty for such fouls is a free throw to the offended side.

The Polocrosse Rules and Information on the Game and Rules for Pony Club Polocrosse is available from the PAA, visit PAA or call 1300 363722.